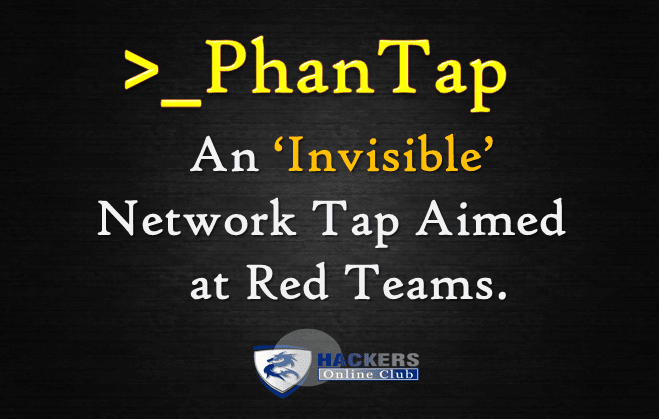 With limited physical access to a target building, this tap can be installed inline between a network device and the corporate network.

PhanTap is silent in the network and does not affect the victim’s traffic, even in networks having NAC (Network Access Control 802.1X – 2004). PhanTap will analyze traffic on the network and mask its traffic as the victim device.

It can mount a tunnel back to a remote server, giving the user a foothold in the network for further analysis and pivoting. PhanTap is an OpenWrt package and should be compatible with any device. The physical device used for our testing is currently a small, inexpensive router, the GL.iNet GL-AR150.

Capture traffic exiting the network (the destination is non RFC1918), source IP and MAC is our victim, destination MAC is our gateway,
SNAT bridge traffic to the victim MAC and IP address,
set the router default gateway to the MAC of the gateway detected just before.

PhanTap has been tested with the GL.iNet GL-AR150. This device has two separate network interfaces in OpenWrt (eth0, eth1).

If your device is using an internal switch (swconfig based) with interfaces like eth0.1, eth0.2, some special traffic might be blocked, e.g. 802.1Q (tagged vlan), but PhanTap should work.

In this example we are using a GL-AR150, which only has 2 interfaces.

Add the interfaces to the phantap bridge via the following commands in the cli (assuming we are using a GL-AR150):

Phantap is now configured, as soon as you plug it between a victim and their switch, it will automatically configure the router and give it Internet access.

You can add your favorite VPN to have a remote connection back. Tested PhanTap with Vpn, port TCP 443, to avoid some detection methods.

You can also add a command to be ran when a new IP or DNS is configured, in /etc/config/phantap, e.g. /etc/init.d/openvpn restart (restart VPN service).

You can also look at disabling the wifi by default and using hardware buttons to start it (https://openwrt.org/docs/guide-user/hardware/hardware.button).

Limitations or how it can be detected :

How Cisco keeps its APIs secure throughout the software development process

Google Plans To Launch Privacy Sandbox In Android 13 In 2023

A Mastodon Vulnerability Could Allow Meddling With...