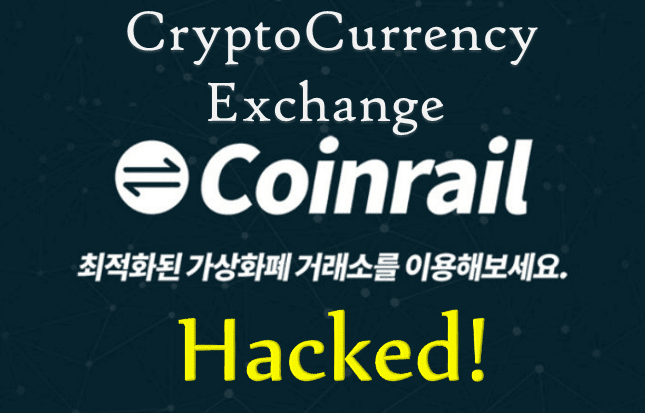 
The South Korean Cryptocurrency Exchange ‘CoinRail’ Hacked and Lost $42 Million. The company wallet address has linked to an cyber attacker and stole $42 Million worth of cryptocurrency.

According to recent CyberSecurity report, more than 1 Billion dollar worth of cryptocurrency has been hacked in the first half of this year.

People are panic selling their alt coins after the Bitcoin price down, it might be the reason of Bitcoin Price is downtrend to a two-month low price.

You can see the real time Market updates here

The company website has suspended its services after the cyber attack on its exchange. In the statement said,

“Hello, this is coin rail.
On June 10, there was a system check due to the hacking attempt at dawn.


At present, we have confirmed that 70% of the coin rail total coin / token reserves are safely stored I moved to a cold wallet and it’s being saved.


Two-thirds of the coins confirmed to have been leaked are covered by freezing / recalling through consultation with each coach and related exchanges. The remaining one-third of coins are being investigated with investigators, relevant exchanges and coin developers.


Among the spilled coins, the token that has been completed is shown below.
• Fundus X (NPXS), Aston (ATX), and Enper (NPER): Freeze
All assets of CoinRail, which have not been leaked, are moved to a cold wallet and are kept safe, and transactions and withdrawals will resume after stabilizing the service. We will update the announcement when possible.


The exact damage of the leaked coin / token is currently being confirmed, which may require some time to be taken with the coin. Also, please understand that all related matters are difficult to share all progress to exclude all possibilities that may interfere with the investigation due to investigation by police agencies.


Coin Rail is committed to maximizing the protection of your assets, minimizing the damage and recovery, and cooperating with criminal investigation agencies in order to catch hackers as criminal measures. At the same time, keep in close contact with the coin developers and follow up We are discussing. The updated contents will be announced on the homepage continuously.


I will apologize for any inconvenience, and I will do my utmost to resolve it sooner. Once again, I sincerely apologize.

It is the biggest cyber attack on crypto exchanges after CoinCheck, which was hacked earlier this year. According to Google trends, Bitcoin search volume is 75 percent down as comparison to last year.

HOC is arising question here, how these exchanges are more secure, people are investing their lifetime money with trust. But after one by one exchanges are getting hacked.

Crypto exchanges should be start Bug Bounty program to secure their website.