The Rise of the Rookie Hacker 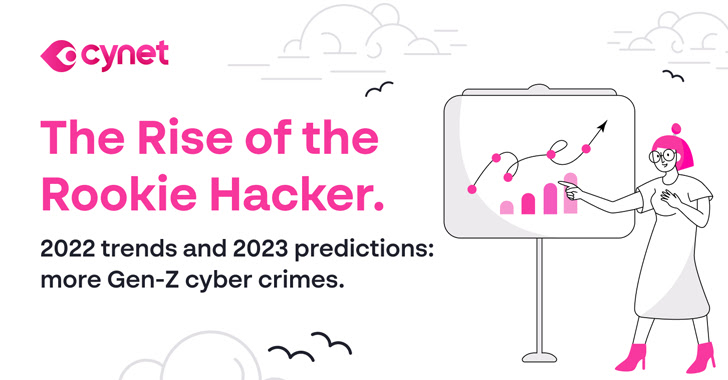 Cybercrime remains a major threat to individuals, businesses, and governments around the world. Cybercriminals continue to take advantage of the prevalence of digital devices and the internet to perpetrate their crimes. As the internet of things continues to develop, cybercriminals will have access to a greater number of vulnerable devices, allowing them to carry out more sophisticated attacks. Cybercrime is expected to become increasingly profitable as criminals continue to find new and better ways to monetize their attack as entry barriers to cybercrime keep going down.

This article discusses key trends we’ve noticed in 2022 that will likely continue in 2023, which we’ll also elaborate on in the upcoming webinar “The Rise of the Rookie Hacker – a new trend to reckon with” on January 11th.

According to IBM’s cost of a breach 2022 report, use of stolen or compromised credentials remains the most common cause of a data breach.

The main source for leaked credentials in 2022 was Info-Stealers – a malware that can steal stored credentials from browsers, cookies (used for session hijacking and to bypass MFA), crypto wallets, and more. Redline Stealer, in particular, gained a lot of popularity among threat actors which led to the creation of several other stealers such as the “Luca stealer” and the “eternity stealer”. The latter is part of an end-to-end offering named the eternity project, which allows threat actors to buy or rent any tool they need to launch an attack against a target of their choosing.

Stolen or compromised credentials were the primary attack vector in 19% of breaches in the 2022 study and also the top attack vector in the 2021 study. This trend is most likely to keep in its upward trajectory as a whopping 59% of organizations don’t deploy zero-trust, incurring an average of 1 million USD in greater breach costs compared to those that do deploy. Until organizations’ cybersecurity will mature, the volume and cost of breaches will continue to rise.

A rise in zero-knowledge attacks

Cybercrimes such as DDoS, malware, and ransomware are all offered as subscription services, lowering the entry barrier into cybercrime. For example, per the Microsoft Digital Defense Report 2022, phishing kits are offered on the dark web from as little as $6 and DDoS attack subscriptions for as little as $500. Ransomware-as-a-Service offered as an affiliates model is the preferred method by actors, this means “renting” an already made operation and splitting the revenue based on income and activity. The rise of “clearnet malware” – malware that can be purchased on everyday platforms like Telegram (Hello again eternity project!) helps simplify setting up a cybercrime campaign or operation. The proliferation of crypto payment platforms makes it even easier to trade in cybercrime products and services, pushing the entire cybercrime ecosystem even further.

In terms of cyberattacks, 2022 was Gen Z’s time to shine, leading with UK teen group Lapsus$ that went on a hacking spree targeting tech titans like Microsoft, Nvidia, Samsung, Ubisoft, and Okta. Generation Z is currently the largest generation on earth. Besides their strength in numbers, they are “digital natives”, being born into a world with the internet, smartphones, cloud technologies, and social networks. Being young, they naturally crave social validation which they get in the digital sphere. Lapsus$’s main motivator was “Kudos” – they were “doing it for the lulz”. The ease of launching zero-knowledge attacks, combined with Gen Z’s digital nativeness and their need for social validation in the digital sphere will most likely contribute to the continuous drop in the average age of cyber criminals.

Enterprises invest billions of dollars deploying multi-layered security frameworks, platforms, and programs, but at the end of the day, enterprises are made of people, and people can be tricked.

Social engineering is an increasingly popular tactic used by cyberattackers to gain access to sensitive data. It involves exploiting human psychology to manipulate victims into providing confidential information or taking certain actions in order to gain access to a system or network.

LAPSUS$’s modus operandi was based on a text-book sim swapping scam. They bought credentials of the person with the right access to resources within an enterprise, called the phone provider, reporting the phone stolen, rerouted the sim to their own phone, triggered multi factor authentication on an enterprise access point (e.g. Office365 login page), and did a password reset. It was ridiculously simple and devastatingly efficient.

The best technology in the world can’t completely remove the risk of human vulnerability. For that you need other humans trained in that. The cybersecurity workforce gap compelled enterprises to outsource this part of their cybersecurity to a managed detection and response (MDR) service. In fact, (according to Reportlinker.com) the global MDR market size is expected to grow from an estimated value of 2.6 billion USD in 2022 to 5.6 billion USD by 2027, at a Compound Annual Growth Rate (CAGR) of 16.0%. Technology is great, machines are great, but we still need humans.

Join Ronen Ahdut, Head of Cyber Threat Intelligence at Cynet for a webinar “The Rise of the Rookie Hacker – a new trend to reckon with” on January 11th at 10AM ET / 15:00 GMT. The webinar will deep-dive into 2023 cybersecurity trends, threats, and technology, including the need for human oversight in cybersecurity and how to detect these new threats.

Trick or treat? Stay so cyber‑safe it’s scary – not just on Halloween